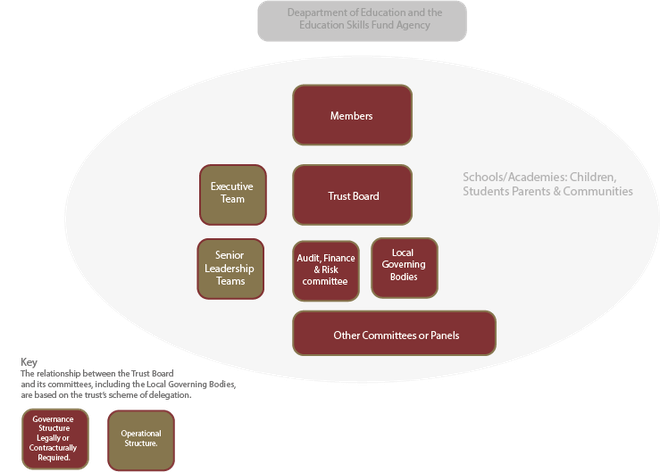 Multi Academy Trusts are governed in accordance with the Articles of Association  and Funding Agreements entered the Company and the Secretary of State under section 1 of the Academies Act 2010, including any variation or supplemental agreements.

Members play a limited but crucial role in safeguarding academy trust governance. While they must ensure they do not stray into undertaking the Academy Trustees' role, they should assure themselves that the governance of the trust is effective, that Academy Trustees are acting in accordance with the trust’s charitable object(s) and that they, the Members, use their powers to step in if governance is failing.

The Members of the LIPA Mult Academy Trust comprises of:

(until they resign or otherwise cease to be a Member in accordance with the  Articles);

1"Sponsor body" means The Liverpool Institute for Performing Arts (company number 02511501 ); or any successor entity discharging the same function in respect of the Academies;

It is the trust board, not the members, who are the organisation’s key decision makers.

LIPA Multi Academy Trust has a team of non-executive Directors, also known as Trustees, whose combined skills offer a wealth of experience to support the Trust's activities.

The Directors plays several roles in the life of each of its academies, setting direction and working with the senior leadership team to ensure that each school provides the best learning environment for its children and students. The Board of Directors is responsible for fostering progress in all areas of the schools' operation, promoting value for money and good use of public funds, and championing the schools in the wider community.

The Directors are responsible for the general control and management of the administration of the trust, and in accordance with the provisions set out in the articles of association and its funding agreement. The Directors are legally responsible and accountable for all statutory functions, for the performance of all schools within the trust, and must approve a written scheme of delegation of financial powers that maintain robust internal control arrangements. In addition, it must carry out the three core governance functions:

Unfortunately not the ones with chocolate chips.

Some cookies are necessary in order to make this website function correctly. These are set by default and whilst you can block or delete them by changing your browser settings, some functionality such as being able to log in to the website will not work if you do this. The necessary cookies set on this website are as follows:

Cookies that are not necessary to make the website work, but which enable additional functionality, can also be set. By default these cookies are disabled, but you can choose to enable them below: